You know the drill..

do you have one?

is it worth it?

where did you buy it?

have you used International or North American Waterways?

what would you do different?

I have one, it came with the boat when I bought it... I have never used it while on the water, just put it up a few times messing around.

Its dark, with screen windows that have velcro clear plastic covers you can roll up.

If I were going to camp on the boat or fish in cold/rainy weather it would be worth it, but all I do is go out on nice sunny days so far...

Where do you live? The guy that did mine works in the Carolina's. 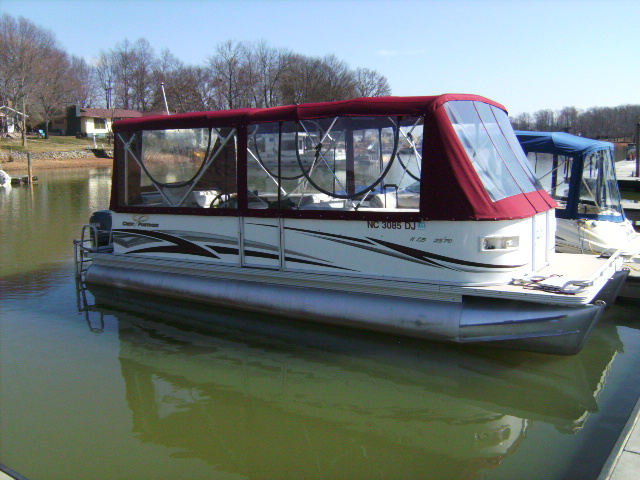 We were dead set on getting one but one of the marina's we talked to recently played devil's advocate and told us that it would likely be too hot and humid to use it. We'd hoped to camp on the boat when we hit the lake.

I can tell you that your dealer is wrong. As you can see, my top has window built into the panels and all 4 doors roll up as well giving me more than enough air. In fact, I've never taken the top down since I had it put on over 2 years ago. During the summer I leave the back panel off due to the water sports going on and stuff. At night if it starts to rain I just zip up the window and listen to it poor in total dryness. In the Carolina's it will hit 100 degrees from time to time and I've never been too hot with the enclosure. In fact it's much cooler with the top up than before when all I had was the Bimini. In the winter I'll fire up the generator and put my Kerosene canon heater on board and it'll be in the 80's inside the boat and the 20 outside. Best move I've ever made for year around boating.
2007, 2570 Crest LE II
Yamaha F150
Top

Here's my two cents, maybe a nickles worth.

do you have one?
Yup

is it worth it?
absolutely as my wife hates bugs and there are lots of skeeters and other bugs around our late in the evenings.

where did you buy it?
ordered it from the manufacturer when we ordered the boats

have you used International or North American Waterways?
just our local lake

do you roll down screens / windows / privacy curtain.
our cover has screens stitched into it and then clear plastic that you Velcro in place to reduce/eliminate airflow

what would you do different?
I wish the enclosure came with blackout curtains as well as the clear plastics, instead we've made some. easy for my wife to do since she's crafty and can sew.

what fabric?
Ours is the same canvas that the playpen cover is made from, same color too. Dark blue.

Here in Colorado the start of our boating season is quite chilly, many of the toons slipped in our marina put their enclosure up and never take them down for the first month to two months of the season. As long as the sun is shinning it can be in the 40s or 50s and the inside of the enclosure will be plenty comfortable if your wearing pants and t-shirt. And a couple of folks leave the enclosures up all season and just pull panels off when they are on the boat and its warm. We like to fish and tube from ours so we tend to only put the enclosure up if we plan to sleep on the boat, the weather is bad or the bugs are heavy (and we plan to be on the boat only during the evenings a couple days in row).

It takes my wife and I 15-20 minutes to put our enclosure up - that includes getting the canvas out of the ski locker to having it fully clipped in place and ready to go.
2010 25' Premier Escapade with PTX
200hp Mercury Verado
Top

I just bought one off Craigslist. I haven't had a chance to install it but think it will be very handy to use when fishing this Winter even if I don't leave the slip.

have one, would never get a pontoon without one. Ours came with the boat. Increases our boating season, we can camp on the boat at the spur of the moment. Have been on the lake with a bad storm approching and not time to get back to our marina, tied up to a state dock on one of the islands (have a all season permit so as long as it's empty, I can tie up) and put the enclosure up. Waited out the storm in relative shelter. With the double bimini, you can have multiple configurations and looks all depending on what you are looking to do. and you don't need to go full, here are some shots of a enclosure I saw while crusing on the river